While writing we use different forms of sentences( i.e Active and Passive forms). Words are used in a sentence according to the emphasis to accorded to them. Words to be emphasised are written in first place and words of less importance are placed in  secondary position in the sentence.

Someone has picked my pocket in the crowd.

The point to be emphasized in this sentence is  'my pocket has been picked' and not by whom. Here we can drop the subject and write this sentence in passive voice as follows.

My pocket has been picked in the crowd.

The two forms of sentences i.e. Active and Passive forms are changed from one to other. The process of changing from Active to Passive form of a sentence is called 'Change of the Voice'.

In a sentence, there are Subject, Verb and Object. But some sentences are without an object. For a change of voice an object in a sentence is necessary.. 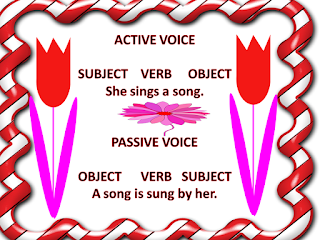 In examination there are questions in the form of change of sentences from one form of voice to another i.e. from Active to Passive form or vice versa.  There are also questions to rectify errors due to wrong change of form of sentences.

1. We find her finding faults with others.

2. She noticed her reading her book.

3. People consider him a fool.

5. Police caught him stealing the box.

6. Why was the chief guest not welcomed by garlanding?
7. He caught him by his neck.
8. The remaining distance was covered by train.

Change the voice of the following sentences.
1. Sticking of bills on this wall is prohibited.

2. The milk-maid will have milked cows by five o' clock.

3. The patient had taken medicine before the doctor arrived.

4. Children were spoiling their clothes.

6. Why were harsh words being used by him?

7. The  employees had been punished for being late daily.

8. Please fetch me a glass of water.

9. The teacher will not allow you to attend the class unless you apologize.

10. Who has been knocking at the door for the last half an hour?

1.  They prohibit sticking of bills on this wall.

(In this sentence there is no subject. So the subject will have to be supposed as 'they' or 'the authorities' as deemed fit. Here it is 'they'.)
2. Cows will have been milked by five o'clock by the milkmaid.

3. Medicine had been taken by the patient before the doctor arrived.

4. Their clothes were being spoiled be children.

( In this sentence subject is omitted in Passive voice because it is 'Duty' that is to be emphasized more than the subject.')
6. Why was he using harsh words?

7. The boss had punished the employees for being late daily.

8. You are requested to fetch me a glass of water.

10. By whom has the door been being knocked at for the last half an hour?

( In sentences with a phrasal verb, the phrasal verb in complete and combined form (i.e. knock at ) is to be  used in Passive form.)

2. Invitation cards  have been sent to all the people.

3. They lodged a strong protest with the chairman of the committee.

4. The doctor could not diagnose his disease.

5. The shopkeeper had refused him further credit.

6.  One can hear the ticking of a clock in the still of the night.

8.  His father got his luggage booked by train.

The pen given to me by you was lost.

2. They have sent invitation cards to all the people.

3. A strong protest was lodged with the chairman of the committee by them.

4. His disease could not be diagnosed by the doctor.

5. He had been refused further credit by the shopkeeper.

6. The ticking of a clock can be heard in the still of the night.

7. It is suggested that we should make another attempt to contact him.

8. His  luggage was got booked by train by his father.

9.  Sugar is sweet when it is tasted.

1. Lights had already been switched off.

2. How did the stranger locate his house?

3. This incident would aggravate his position.

5. The visitor paid a number of visits to his house.

6. They must have caught the train by now.

7. Who can finish this work in such a short span?

8. The principal admired him for his good performance.

9. One must respect one's elders.

10. Persons living in glass houses should not throw stones at others.

1. Someone had already switched off lights.

2. How was his house located by the stranger?

3. His position would be aggravated by this incident.

4. Hot tea is contained in this kettle.

5. A number of visits were paid to his house by the visitor.

6. The train must have been caught by now by them.

7. By whom can this work be finished in such a short span ?

8. He was admired for his good performance by the principal.

9. Elders must be respected.

10. Stones should not be thrown at others by  persons living in glass houses.

Duty must be done.

2. They say that his brother is a rogue.

It is said that his brother is a rogue.

Sugar is sweet when tasted.

It is said that diligence always pays.

5. Authorities turned down their request.

Their request was turned down.

( In this sentence request is of more importance than the subject authorities. So subject is omitted in Passive voice.)

6. The guard kept a strict vigil on them.

They were kept under a strict vigil.

The guests be showed in.

8. We should respect our elders.

Elders should be respected.

Am I allowed to take your pen?

It is time for the lesson to be revised.

1. Her conduct surprised me.

I was surprised at his conduct.

2. His behaviour astonishes all of us.

All of us are astonished at his behaviour.

3. They say that she is a pious lady.

It is said that she is a pious lady.

Beautiful stories are contained in this book.

5. This forest infests many wild animals.

This forest is infested with many wild animals.

6. She displeased her boss.

Her boss was displeased with her.

All of his friends are known to me.

8. His behaviour displeased me.

I was displeased with his behaviour.

9. They say that the governor is on tour.

It is said that the governor is on tour.

10. They went to see the launching of the ship.

They went to the launching of the ship to be seen.

1. Boys jeered at the poor man.

The poor man was jeered at by the boys.

2. Flowers were decorated on both the sides of the road.

Both the sides of the road were decorated with flowers.

3. Our forces expect to conquer the enemy soon.

It is expected by our forces that they would conquer the enemy soon.

4. The spectators thronged the streets.

The streets were thronged with the spectators.

5. May the child live long!

It is prayed  that the child may live long.

Promise must be kept.

He was elected captain by boys.

8. His remarks offended the boss.

The boss was offended with his remarks.

9. His behaviour in the meeting annoyed all.

All were annoyed at his behaviour in the meeting.

Am I allowed to take your leave now? 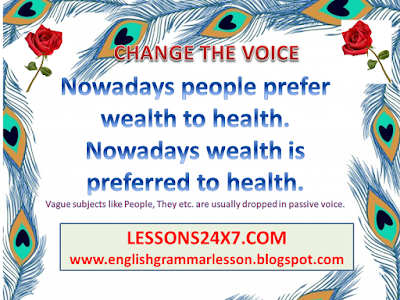 Your view/suggestions about style/content of blog posts are solicited. Do post/e-mail

Email ThisBlogThis!Share to TwitterShare to FacebookShare to Pinterest
Labels: English Grammar Lesson --Change the Voice -- Active and Passive Voice --Exercises for Practice (with solutions) --Change from Active to Passive voice or Vice Versa