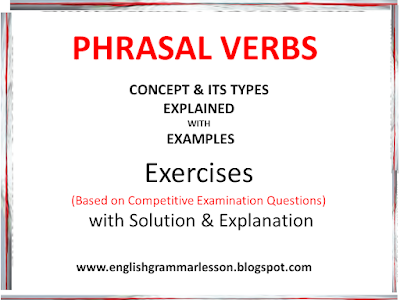 A combination of words that makes a complete sense or meaning is called a sentence.

The word or words denoting the person or thing about which something is said are called the subject of the sentence.

The word or words which say something about the person or thing denoted by the subject in the sentence are called the Predicate.

The subject and predicate are absolutely necessary to make a complete sense in a sentence.The subject of a sentence usually comes first, but occasionally it comes after the predicate. Just in this sentence to put emphasis in the sentence.Down went the building like a pack of cards. In Imperative sentences the subject is implied and is left out as - Stand up.Here the subject 'you' is left out.

A group of words that makes a sense but not a complete sense, is called a Phrase.

People have come to see the fair from far and near.
The sun rises in the east.
She is a lady of virtues.

In the above sentences words in italics form a  phrase.

A clause is a group of words forming a part of a larger sentence and having a subject and a predicate of its own and  makes a complete sense.

Example of a Clause:

I went to school when I was five years old.


Examples:
We should act on the advice of our parents.
They hit upon a plan to get out of the trouble.
We went across the river in a boat.

2. His uncle brought up the child.

In the first sentence bring is a transitive verb and it means 'to fetch'. But in the second sentence, another word 'up' is added to it which changes its meaning altogether. Such a word is called a phrasal verb.

Transitive Phrasal Verb is a verb having an object e.g.

We were alarmed at his weakness.
The hunter aimed at the bird.
John gave up smoking.
The child hit upon a plan.
The principal presided over the meeting.
He quarrelled with me over a trifle.
Children take after their parents.

The words in italics in the above sentences are Transitive Phrasal Verbs because these all are followed by an object.

Intransitive Phrasal Verb is a verb which is not followed by an object e.g.

Friends fall off in adversity.
He broke down during his speech.
Both the brothers fell out over a trifle.
The autumn season has set in.
I get up at 5 O'clock in the morning.
Fire broke out in the factory.

The words in italics in the above sentences are Intransitive Phrasal Verbs & these all are not followed by any object.


Following are some of the examples of transitive and intransitive phrasal verbs :


This all will only add to his woes.
The patient was admitted into the hospital.
Her father did not agree with her in this matter.
All the passengers alighted from the train.
His father allotted to him this piece of land.
I was not amused at his jokes.
The stranger apologised to the host for his bad behaviour.
Please attend to what the boss says.
A gold medal was awarded to him.

The couple was blessed with a son.
The merchant backed out of his promise.
All the friends backed up him.
Some robbers broke into his house at night.

All our efforts to bring him round to our views failed.
The old woman burst into tears.
Trees bring forth new leaves in spring.

Let me call up your name.
I called on him yesterday.
I called  at his but he was not at home.
We should call in a doctor.
The boy called out at the top of his voice.
The workers called off their strike yesterday.
Road accidents carry off a large number of people every year.
You should carry out  the orders of your boss.
His manager  will carry on the work in the absence of the boss.
On my way to office I came across an old friend of mine.
He comes of a  noble family.
His marriage comes off on Monday.
How did you come by this book?
At last her father came round to her views.
We should cut down our expenses.
His comments cut her to the quick.
The speaker had to cut short his speech.

The horse dashed off down the road.
The waves dashed on the rocks.
It is your turn to deal out the cards.
I shall deal with him as I like.
We deal at M/s Mathew &  co.
They deal in sugar.
The examinations are drawing near.
The manager is drawing up the report.
All the friends drew back from him.


Please excuse me from attending the office today.
She expected an urgent message from her father.
The boss exempted her from payment of her dues.
Her sister excels her in dancing.


My all advice fell flat on him.
All our plans fell through for want of money.
On my way home, I fell in with a group of singers.
The robbers fell on the travellers.

Both the friends are getting on well with each other.
With a  great courage he got over all the difficulties.
He got into trouble through his own folly.
How are you getting along with your business these days?
All of a sudden the bridge gave way.
Let him go on his job.
I have gone through the book.
May he grow in wisdom as he grows in years!


I went there to inquire after his health.
We should not interfere with them in their affairs.
The police is inquiring into the incident.

The jury decided to jump on the proposal.

The new entrant is unable to keep up with others.
In winter we wear woollen clothes to keep off cold.
Both the brothers are keeping on well with each other.
We should not keep back anything from him.

He is lost to all sense of shame.
Look up this word in the dictionary,please.
The old man was looking for his lost purse.
We should not look down upon the poor.
Children are looking forward to summer vacation.
Children always look up to their parents.

You will have to make good his loss.
The child made up a false story to conceal the truth.
The old man made up his mind to start a new business.
The train was late but it made up  time.
The thief made good his escape in the darkness.
Both the brothers made up their difference.
The thief made off with all of their belongings.
Can you make out the meaning of this sentence?

The child owes to his parents for his progress in life.
He is occupied with his new business these days.
His speech offends against decency in manners.
Her parents are not opposed to her decision.


The swindler passed for a gentleman.
It is difficult for me to put up with such a  mean person.
He put me off with a lame excuse.
She put out the light before going to bed.
The child was placed under the care of his mother.
All the members placed their confidence in the chairman.
The officer found negligent was placed under suspension.
Nothing can prevent him from going there.
Do not put off till tomorrow what you can do today.
We pushed on at a quick pace.
We must pull the business through somehow.
We should put up something for the rainy day.
The father felt puffed up at the success of his son.

A bad workman quarrels with his tools.
The stag quenched its thirst at a pond.
He quarrelled  with his neighbor over a trifle.
He quoted references from scriptures in his speech.


The company is running short of money.
The car ran over the old man.
Their family has run into a large debt these days.
The goods train ran into a stationary engine.
After the day's hard labour my father feels run down.
Sands of life are running out.
She is rejoicing at his success.
They rallied round their leader for fighting.
The swindler robbed her of her money


My father set up a new factory last year.
The old lady set out on a long journey.
The winter season has since set in.
The new teacher set all the miscreants right.
You should set about your work at once.
He set on the boys to fight.
The manager set a meeting up with the chairman.
The police stand by to avert any unpleasant situation.
My all friends stood by me in adversity.
He was not strong enough to stand against me.
All the fellow colleagues sided with me in this matter.
He is sure to succeed in his new business.


Children take after their parents.
The child took a rope for a snake.
I was taken aback on hearing his remarks.
His son has taken to the bad habit of drinking.
He took off his shirt and waived it in air.
The aeroplane took off within seconds.
The students took down what the teacher stated.
The principal took up the matter with the parents of students.
The thief took to his heels on seeing a policeman.

The child did not turn off the tap.
Please turn on the tap.
The manager has not turned up so far.
He turned down my request to him for help.
Will you please turn down TV as I am a little unwell?
Please turn up the music. I like this song very much.
Hard work has told upon his health.

Why are you whiling away your time?
This piece of cloth will wear well.
The day is wearing away.
Things wear out in course of time.
Finally the manager won over the boss to his side.
The accountant worked out the total cost of  the project.
His plans did not work out well this time.
People warm up themselves in winter by sitting in front of a fireplace.


The young lady yearns for her love.
He never yielded to odd circumstances.
The dogs yelled at the beggar.

(your comments/suggestions about the post solicited)
(Exercise for practice in the following post)
Posted by lessonenglishgrammar.com at 00:27

Email ThisBlogThis!Share to TwitterShare to FacebookShare to Pinterest
Labels: English Grammar-- Phrasal Verbs- Meaning and their usage with examples